Do they have anything to do with the Insane crips in Oceanside.......

Leather Face wrote:Ey what happened to the Insane Crips? How did they become inactive? I know theyve been inactive for years, but sometimes i catch a nigga claiming "Insane" The same with Inglewood Crips, what the fuck happened to these Inactive crip sets?

Insanes r still around they r the deepest blacc gang n LB. When I stayed out there a few years ago they were all around my apartments off Atlantic.

Insanes are deep as hell in long beach. My cousin stay's in lb and from what he has told me they are so deep that its not uncommon to hear one of them asking "Who put you on?"

how come theyre so far from sc la and still be tight with hoovers and push neighborhood killa, do they drive to bang?

chang wrote:how come theyre so far from sc la and still be tight with hoovers and push neighborhood killa, do they drive to bang?

I'm not sure on this but maybe because ...

B) Hoover's usually have not gotten along with Rollin' Crip sets. You know, at one time they were even clicked up with the Eight TRAY Crips (and TRAY Crips are under the Gangster Crip umbrella)

... naturally causing Hoovers to be buddy-buddy allies with Insanse Crips

= both share a common rival which is the Rollin' Crips 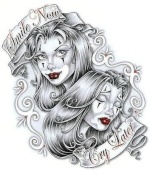 THE ES 20S DONT HANG WIT ANY ROLLIN GANG IN L.A IF YOU LIVE IN LONGBEACH YOU KNOW HOW DISTANT WE SEEM TO BE ITS LIKE WE IN OUR OWN LIL WORLD ...PPL THINK 20CRIP IS NAYBAHOOD BUT THEY NOT ...AND THE INSANES CLICKED UP WIT THE HOOVAZ IN PRISION ...NOT ON THE STREETS....INSANES MAYBE THE DEEPEST GANG BUT THE 20S GOT WAY MORE KILLERS FROM THEY HOOD...20S AND INSANES BEEF BUT WHEN A MEXICAN COME ALONG THEY HOLD THAT BEEF AND SMASH ON A LONGO ANYDAY...THATS WHY THE ES LONGOS ARENT AS STRONG AS THE WS LONGOS

insanes, i thought hated 60s from the early 80s??? So it would have to be as easy as breathing to ally with hoover, if ever met, as they did. My folks from the beach say ICG still active.... never stopped being. I dont know much about the beach though.